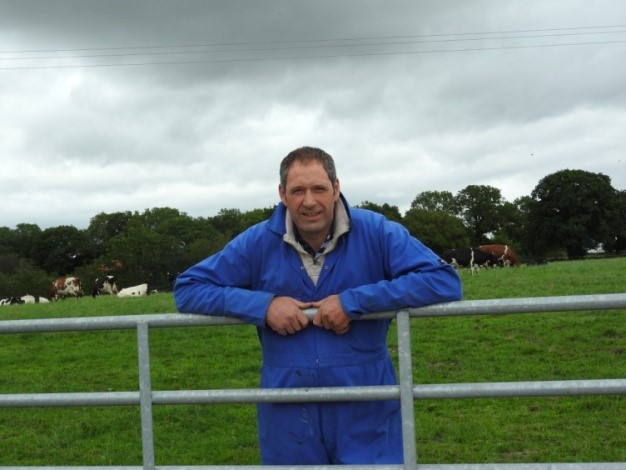 For Shropshire milk producer Julian Evans, who runs 160 cows plus followers with his wife and father on just 174 acres at Heath View Farm, Ford, near Shrewsbury, farming with the utmost efficiency is more of an imperative than an option. Julian believes carbon footprint farm assessments help him to prioritise his management.

Resources, and most crucially land, are limited, with a 79 acre grazing platform at the farm and additional land either owned or taken as grass keep away from the unit. He therefore has had to work hard to build a system with sufficient output to support two families in the current climate and be sustainable for the long term.

Success is a testament to his clear thinking and ability to focus on the important management factors. This has been aided over the past four years by annual performance assessments carried out by Alltech E-CO2 as part of milk processor Arla’s on-going commitment to improving farm efficiency and reducing carbon emissions. According to the farm’s 2015 performance and carbon report, the carbon footprint is excellent, sitting at 910g of CO2 equivalents per litre of milk produced, well below the industry average of 1,230gCO2e/l.

Cows are rotationally grazed from turnout until drying off in the summer.

“The significance of the carbon footprint result is that it is a measure of farm efficiency,” says Andrew Wynne, joint business manager of Alltech E-CO2. “There is a common misunderstanding that it costs a farm business to reduce its carbon footprint, but the opposite applies. Lower carbon emissions per unit of production means you are more efficient, and that will always mean greater productivity and profitability. I do not believe there is a better way to monitor dairy farm performance or benchmark your business against others.”

Julian Evans’ quest for efficiency actually began long before he began carbon footprint assessments. The first real change from a more traditional approach came around 15 years ago with the decision to switch to crossbred cows for their longevity, fertility and ability to perform off forage.

“It was around 2000 that we started crossbreeding by using Jersey, Swedish Red and British Friesian bulls on our Holstein Friesian herd,” he explains. “The aim was to breed for better health and fertility, to improve the cows’ longevity, and also to build a herd that was more suited to a forage-based system. We are continuing with this, now using more New Zealand type Friesians.

“We do not have sufficient acreage in my view to operate a traditional spring block calving system, so we calve in an eight week period between the end of August and the end of October. I believe this system allows us to utilise forage very efficiently, and it works for us in relation to our milk contract, which currently has seasonality penalties for spring production.”

The herd is currently averaging just over 8,000 litres per cow, with close to 4,000 litres coming from forage. This is achieved through the use of quality grass and maize silage, fed as part of a total mixed ration during the housing period or as a buffer feed when milkers have access to grazing. Fodder beet is also included in the winter ration at around 8kg/head/day.

“As the cows calve they will go onto rotational grazing paddocks, then as grass availability and quality declines into the autumn we increase the conserved forage ration,” explains Julian. “Milkers will be in by night by early October and then inside fully by the end of October. They will then be on a full winter ration, which will include grass and maize silage and a concentrate blend fed at 10kg/head/day. We do not feed anything in the parlour.

“We’d expect cows to be still giving around 25 litres/day by mid March, when we’d usually be turning them out. At this point we reduce the concentrate ration down to a minimum of 2kg/head/day and continue feeding some silage as a buffer feed.”

A tight calving pattern, and also heifers calving down at 24 months, contributes significantly to the system’s efficiency and low carbon footprint. This has been made possible partly through the enhanced fertility arising from crossbreeding, but also through maintaining the right condition and Julian’s DIYAI and attention to detail in breeding management.

“We start serving cows from 15th November, when they are inside full time and so it is easier to monitor bulling activity,” he adds. “We don’t use any kind of heat detection aids but achieve 97% submission rates and 70% conception to first service.

“Once we are through the eight week service period, I pause for a week and then continue to serve anything not already in calf. We’ll only keep cows that calve within the tight calving period, but continuing to serve means we have the option of either selling cows as culls or as in calf cows for spring calving herds.”

A similar approach applies with heifers, with anything not holding to calve by 24 months being sold as bulling heifers.

Forage production and quality is maintained through a regular reseeding policy, with long term perennial ryegrass and white clover leys predominating. Stubble turnips are used as a break crop usually after a first cut has been taken, these also providing an efficient summer forage source option for dry cows or youngstock.

Further efficiency has recently been introduced with an innovative approach that provides an alternative to baled silage for dry cows.

“We’ve an area of mature grass that at one time we might have cut and baled as low quality forage for non-milking cattle,” explains Julian. “The more efficient option, we are finding, is to mow the grass and then allow the cattle access, using an electric fence to keep them back from the uncut grass.

“This is an Italian ryegrass crop that went in after wholecrop cereals last year. It has been grazed by bulling heifers last autumn, was cut in May for silage, and was then allowed to grow and provide fodder for the dry cows. It is a lot more efficient than making big bales and feeding them.

“Once this area is cleared in late summer we’ll go in with a tine drill and establish a long term grass ley.”

Up until this year Heath View Farm has grown maize. Whilst maize will remain important forage in the ration, Julian has taken the decision to buy it in going forward, rather than tie up land and other resources to grow it.

“We have 40 acres being grown on contract this year, and the land that would otherwise have been used for this is freed up for other forage crops and reseeding,” he says. “We were using contractors previously for cultivations, drilling and harvesting, so doing it this way helps our cash flow as is also more compatible with cross compliance.”

It is also sometimes necessary to invest in order to improve farm efficiency, and Julian has recognised this with the installation of a 400,000 gallon slurry store, giving the farm six month storage capacity.

“We are no longer dumping slurry but using it in a more measured way,” he adds. “This means we are making better use of the nutrient value and cutting back our need for bought-in nitrogen as a consequence.”

Far from complacent, Julian Evans recognises the need to continue improving his business. That’s where on-going performance and carbon monitoring is important, as the annual report not only presents the current snap-shot but also identifies areas where future opportunities for improvement exist.

“We identify the farms strengths and successes,” concludes Andrew Wynne, “and we also highlight the areas where there is still scope to do better. For example, feed efficiency at Heath View Farm has improved year on year, but at 0.32kg/litre is only just above average. Our advice in this particular case is for the farm to work with its nutritionist to explore ways of improving feed use against milk yields and quality through ration formulation.

“Rumen function has a very significant impact on efficiency in all dairy herds, and Heath View Farm is no exception. As the diagram showing the breakdown of emissions from this herd shows, methane from the rumen is the single biggest contributor to the carbon footprint. Attention to detail in feeding to maximise rumen efficiency is going to pay dividends in this herd, as it will for the majority.

“The most important thing about the farm assessment is that it provides a consistent way to measure all aspects of performance. Only by measuring performance can you manage it effectively.”