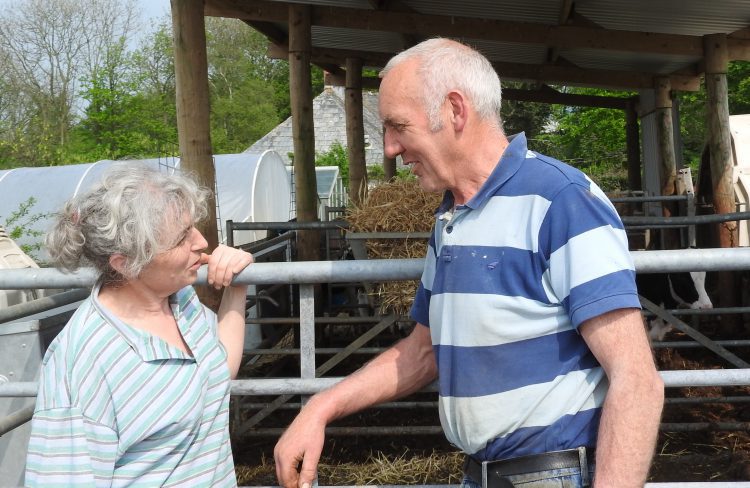 Rigorous attention to detail on a range of key areas is helping Arla farmers, Maurice and Zoe Davey, to keep increasing the efficiency of their dairy herd.

Foot trimming is one of the Davey’s current priorities, as they strive to eliminate lameness completely from their all-year-round calving 120-cow Marwin pedigree Holstein herd. It’s a skill Zoe has learned recently, by attending a four-day course, and allows her to adhere to a discipline of proactively treating all cows annually at drying off (heifers pre-calving) and all animals again at 100 days in milk, to keep them sound – as opposed to having to deal with lame cows reactively.

Trimming feet is just part of the solution to lameness, as they are quick to point out, just as maintaining sound cows is just one part of running an efficient and successful dairy herd. Zoe also lists mastitis control and heifer rearing as key areas where tangible gains have been made in recent years, and Maurice points to grassland reseeding as another important area where the business has seen real benefits.

“We are soil testing and addressing any nutrient deficiencies, and also using an aerator to improve soil health,” he says. “We have 180 acres in total, all down to grass, so reseeding 10 to 20 per cent of the grassland area annually is, we think, the cheapest way to acquire more land.”

Based at East Kimber Farm, near Okehampton in Devon, the Davey’s are a great example of how a family dairy farm can make the most of its resources through attention to every detail of the business. As Arla farmer owners, they participate in the Arla Sustainable Dairy Farming initiative, taking advantage of all the support and advice that is made available in order to keep moving forward.

One of the tools available through the initiative is a carbon footprinting service, which helps to monitor progress and also provides performance benchmarking. The annual assessment and report, provided by environmental consultants Alltech E-CO2, covers all inputs and outputs, with the carbon footprint – measured in carbon dioxide equivalents per litre of milk produced – being directly correlated with farm profitability.

In 2015, a carbon footprint of 1,174g CO2/litre FPCM put the Daveys comfortably inside the top quartile of herds nationally, giving a clear signal that their efforts are paying dividends.

Whilst clearly encouraged by the report, Zoe’s point is that advice is freely available and their principle achievement is to take the opportunities and act on them, as typified by the farms concerted attack on lameness.

“Gaining a proper understanding of why and how to trim feet has been important, so the opportunity to go on a course and learn advanced techniques has been essential,” she adds. “We also use a daily footbath, which is automated so that the water is constantly replenished and clean, and we use formalin at just 1.5 per cent concentration. This ‘little and often’ approach, combining regular foot trimming with the daily footbath, appears to be working effectively.”

They keep a mobility scoring record for the entire herd, ranking cows on the AHDB one to five ranking system, and are now reporting no cows at all with the lowest mobility score of five, and a rapidly improving picture overall.

Mastitis has been another area that Zoe has prioritised, first addressing a high cell count situation, with excessive clinical cases, over five years ago. Success has been achieved not through any radical investment or intensive culling policy, but by adhering to the best principles of parlour hygiene and applying attention to detail in housing and also breeding selection.

“We started by improving the lighting in the parlour, so we could see properly what we were doing,” recalls Zoe, “and then it has been about sticking to a rigid pre- and post-milking routine, with disciplines such as using one paper towel per cow being sacrosanct.

“We are now at a point where only about five mastitis cases a year require antibiotic treatment, and we are running with a very low somatic cell count and bactoscan.”

Control of mastitis has allowed the Davey’s to introduce selective dry cow therapy over the past five or six years and they have now reached the point where only about 20 per cent of the herd receive antibiotic tubes at drying off.

“It’s been a concerted effort to tackle mastitis, and you can never really stop focusing on it,” adds Zoe. “I do believe it is to some degree hereditary, so we look at the SCC index when selecting bulls for our heifer replacements, alongside other health traits, but management inside the parlour and out is the most critical thing with mastitis control.”

Another key area where the Davey’s are excelling is in heifer rearing, with replacements now calving down consistently at 24 months and there being a steady surplus of animals for sale. This is achieved through DIY AI and the use of sexed semen on heifers or cows identified as potential replacement mothers, with conception rates comparable to that achieved with non-sexed straws and a 90 per cent plus success rate in terms of female calves born.

In order for heifers to achieve 24 month calving, calf rearing needs to be as near to problem-free as possible, from day one, so every effort is made to ensure this is the case.

“Again it comes down to the small details,” says Zoe, “such as not allowing calves to suck, therefore avoiding the risk of infection, but ensuring they have four litres of good quality colostrum within three hours – we use a refractometer to check the colostrum quality.

“We also ensure that milk substitute is fed at precisely the right temperature of 39OC, after the powder is added, and weigh every jug of powder so we know they are receiving the right amount.”

This precise approach continues, with any sign of scouring or any other health issue being addressed promptly and thoroughly, with proactive involvement from the farm’s vets at the St Boniface Veterinary Clinic in Crediton.

The introduction of hutches has been positive for overall health, with group hutches used up to the point where calves are sufficiently well grown to go into straw yards.

As with many family dairy farms, the Davey’s are operating with a finite acreage and limits on their scope to invest and expand. They are, however, constantly moving forward, with a herd that averages close to 10,000 litres per cow per year with a level of overall efficiency – measured by an impressive carbon footprint – far better than the majority. Success is a testament to their teamwork and dedication, plus a determination to leave no stone unturned.

This article was originally published in British Dairying May 2017 Vol 23, No. 7